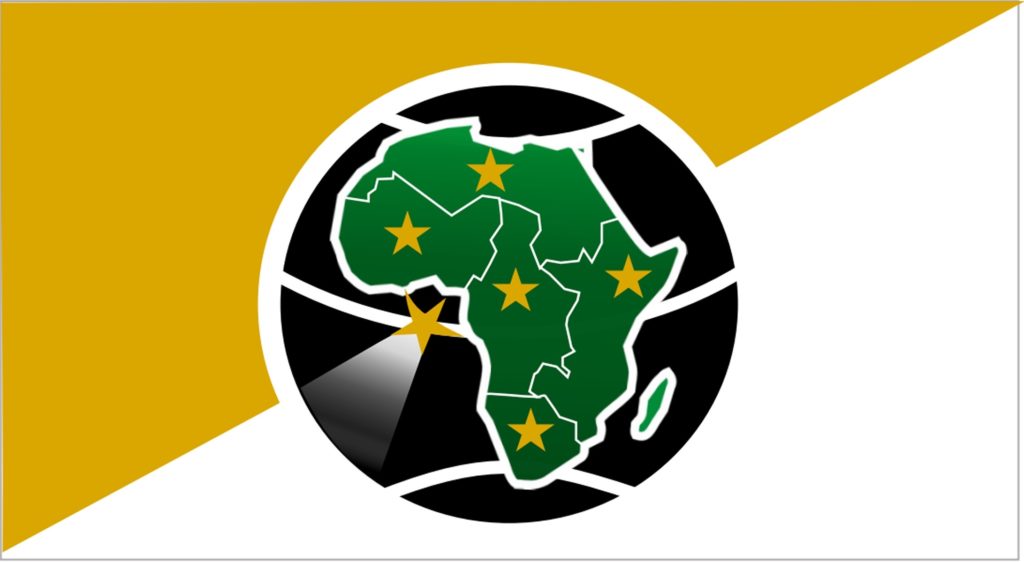 DESCRIPTION AND SIGNIFICANCE
The Diaspora (streaking star representing traditional and continental Africans) returning from around the globe with thrust, experience and strength; embracing and illuminating the African renaissance. The golden stars within the African map are geographically located to identify the 5 regions on the continent (West, North, East, Southern and Central). The diagonal background describes Africa’s consolidation projections …for `there is nothing more powerful than an idea whose time has come.`

THE COLOURS
EVERGREEN (incorporated from the AU Flag) symbolizing diverse and fertile land, hope and the quest to protect the environment for the future generations.

Black & White – Providing contrast for common ground to do positive business amongst ourselves and the world. Africa coming together as one.

This is a moment in history, over 17 years in the making.

On July 9th, 2002, Ghanaian President, John Kofi Agyekum Kufuor and his delegation attended the Organization of Africa Unity (OAU) Summit held in Durban, South Africa. At that historic gathering, the name was changed from OAU to the African Union (AU) beginning a new and exciting chapter for Africa’s development.

Discussions surrounding the state of African Affairs and the means of progress were on the table when Dr. Erieka Bennett, a Diasporan residing in Ghana, asked President Kufour about the role of the Diaspora in the development of Africa and her future. This profound question sparked a nerve and President Kufuor was moved to recommend to the President of the Commission at that time, President Abdoulaye Wade, that the Diaspora as a constituency and resource, must be included in all considerations regarding the progress of Africa. So moved by the enormity of the prospect of the support and importance of the millions of Africa’s children residing outside of Africa, President Wade echoed the sentiment and declared to the floor of the General Assembly that the Diaspora should be considered the “6th Region of Africa”.

History will record that at that seminal moment in the womb of time, Dr. Bennett’s question, answered by President Kufuor’s suggestion to President Wade, gave rise to the concept and principle of “The Sixth Region of Africa”. It is now cited in scholarly journals and is for a certainty a recognized and respected designation for the Diaspora. The Sixth Region designation recognizes that the Diaspora are part and parcel of the present and future of Africa.

On February 2nd, 2022 a global audience will behold a tangible sign and symbol of the presence and participation of the Diaspora in African Affairs, when the Diaspora African Forum (DAF) will officially launch the newly created flag for The Sixth Region of Africa: The Diaspora. The various Diaspora groups and organizations all around the world will also launch the flag at their various locations throughout the 28 days celebration of the Black history month in February. This momentous occasion is the culmination of the vision, sacrifices, courage and efforts of many luminaries. What began as a longing, has now found the substantive embrace of many African Nations. The flag will fly as the herald to the Diaspora throughout the world. This amazing 6th region flag will fly as both a legacy of great men and women and mark yet another chapter in the forward march of the continent.

The flag is the design of renown Development Architect, Professor Kwame Addo. Professor Addo has designed both currencies and national symbols for South American nations as well erected historic landmarks throughout the world. His powerful design beautifully captures the history and future of the Diaspora in Africa. The power and solemnity of the flag fits perfectly with the ensemble of the other 5 regional flags.

Five years prior to the historic 2002 meeting, the seed for an international bridge connecting Africa and her Diaspora, was germinating in the minds of several African Americans spearheaded by Dr. Bennett. On July 7th 2007 that seed grew into the Diaspora Africa Forum that was immediately recognized by The African Union as a key supportive Diaspora Body to help encourage and mobilize diaspora support and engagement from around the world.

Ghanaian President John Kufuor was the first African Head of State to give actualization to the concept of the Diaspora Africa Forum as the bridge to connect Africa to her Diaspora. His Excellency donated land at the historic W. E. B. Dubois Compound for the first ever Embassy for the Diaspora. With the worldwide support of the Diaspora, the building was erected and inaugurated with African American Dignitaries from around the world in attendance, including Rev. Jessie Jackson and Ambassador Andrew Young as well as many Africans from across the Continent. President Kufuor further honored his commitment to the Diaspora by being the first country to confer full Diplomatic Status upon The Diaspora African Forum (DAF or Forum).

From its inception, The Forum has sought to be a means and catalyst for the rise, strengthening and participation of other Diaspora Organizations in African Affairs. The Forum was founded upon and remains committed to supporting the aims and objectives of the African Union, and has served as an umbrella and organizing body for a plethora of Diaspora Organizations. The Forum coordinates, supports and shares information among the Diaspora and other organizations, as well as performing charitable and relief efforts. The Forum is an independent body that has never accepted any funding from any government or the African Union, rather the Forum believes that the Diaspora must serve the African Union and its respective nations, rather than be an added burden upon them. Like a nation, the Diaspora aspires to contribute to the financing and administration of Africa and its bodies, in every meaningful way.

Spurred on by its interaction with the Forum and other Diaspora organizations, the African Union went further in supporting the 6th Region when on a proud day in May of 2012, DAF and many other organizations saw their years of labor actualized, at the African Union’s Global African Diaspora Summit held in Sandton City, Johannesburg, South Africa, where Heads of States adopted a Declaration that recognized the 6th Region of Africa and initiated the inaugural African Union Diaspora Program.

The Diaspora Engagement Project arose out of this program. Its aim was and still is to;

For the (10) years since this declaration, the 6th Region has done exactly this. Thanks to the leadership of then AU Commission Chairpersons Alpha Oumar Konare of Mali and Nkosazana Clarice Dlamini-Zuma of South Africa, it is fitting and proper that 10 years of efforts, contributions and sacrifices should find their actualization.

Following Ghana’s lead, many other African Countries enacted policies and measures to give structure and substance to their Diaspora.

In fact, 41 countries have, in some way, institutionalized Diaspora engagement. 21 have specific policies and 30 have dedicated institutions. Within these actions, the Phrase “6th Region” has clearly become synonymous with the Diaspora

The AU Citizens and Diaspora Directorate (CIDO) was created to continue to concretize the 6th   region and to ensure the AU’s Diaspora engagement. It provides leadership, coordination and practical guidance to AU member states on how to establish and work within known Diaspora engagements structures and organizations.

By far, the most monumental accomplishment of the 6th Region, through its Diaspora Organizations, has been the realization and proliferation of Dual Citizenship on the continent. The first historic mass swearing-in took place in 2017 in Ghana at the historic WEB DuBois compound, where the Diaspora African Forum is also housed. Thirty-five African Diasporans were sworn in as citizens of Ghana that glorious day. In 2019, in a ceremony of amazing proportion, the current President of Ghana, H.E. Nana Akufo-Addo ensured that another 126 were given citizenship. Currently, Ghana has another 110 Diasporans ready to take the oath of citizenship. Since then, Sierra Leone has sworn in groups of 20 to 25. Guinea Bissau, and Nigeria have worked with the Forum to prepare its new programs.

February 2, 2022 will be an incredible moment in historyOn that day, all of the men and women,known and unknown who for many years worked tirelessly and sacrificially to see this day will be recognized and celebrated. And while the act of hoisting the 6th Region Flag is ceremonial, it marks an undeniable juncture in history where the past meets the future. It marks an awakening. It celebrates the struggles of the past and recognizes the more than 200 million African Diaspora who are connected to Africa – spiritually, emotionally, physically and commits us all to a direction and course of action for the sustainable development of our beloved Africa. As Victor Hugo said; “There is nothing more powerful, than an idea whose time has come.”

Presentation And Handing Over Of The 6th Region Of Africa Flag At AfCFTA.

In an emotional and historic ceremony at the Africa Continental Free Trade Area (AfCFTA) Secretariat in Accra, Secretary General HE Wamkele Mene hosted the flag of the African Union’s Sixth Region.

In attendance were the deputy Minister of Trade and Industry Hon. Herbert Kraba, the original instigator of the Sixth Region Ambassador Erieka Bennet of Diaspora Africa Forum, and the designer of the 6th Region Flag Professor Kwame Addo.

In his speech, Secretary General Wamkele Mene stressed that beyond the emotional speeches, Africa must now shift into the next gear and get in the business of actualizing intra-Africa trade.

Mene revealed that plans are far advanced to facilitate the intra-Africa trade with local currencies.

A trade summit between Africa and the Diaspora to be held in St. Lucia in the Caribbean is also coming up.

African Union’s Sixth Region was birthed at an OAU meeting where the member nations voted to change the name to African Union. At that meeting, Ambassador Erieka Bennet approached Ghana’s president John Agyekum Kufuor to remind him of the potential role that Africa’s Diaspora can play in the quest to achieve the organization’s objectives.

President Kufuor immediately saw wisdom in the suggestion and relayed the proposal to Senegalese president Abdulai Wade who was then chairman of the African Union. The motion was tabled and the member nations voted to officially make the African Diaspora the Sixth Region behind, West Africa, Northern Africa, Eastern Africa, Sothern Africa, and Central Africa.